This case involved a female patient who had a 5 cm cyst on her right ovary. She underwent surgery for removal of the cyst with possible oophorectomy. During the operation, her surgeon encountered dense adhesions throughout her abdomen. Extensive adhesiolysis was carried out in order to better visualize the pelvic structures. Despite this, neither the cystic mass nor ovaries could be found. The defendant surgeon was called in for a consult and performed a manual palpation of the lower abdomen and pelvic structures, but he too could not find any abnormal masses. At this point, the procedure was terminated. Post-operatively, foul-smelling drainage was noted coming from the incision site and the patient’s condition declined. She was taken back into surgery where the defendant performed an exploratory laparotomy, encountering dense adhesions and inflamed bowel throughout the lower abdomen. Tissue planes were very difficult to discern. Stool was seen throughout the surgical field and 2 large enterotomies were noted in the terminal ileum. About 2 feet of affected bowel was resected and a temporary ileostomy created. The next day, more feculent drainage was seen oozing from the incision and yet another exploratory laparotomy revealed a large enterotomy in the small bowel. which was repaired directly with sutures. Over the next several days, tedious wound care protocols were followed yet the patient continued to spring leaks in her bowel, which required 2 more surgical repairs.

The plaintiff claims the defendant negligently managed the patient’s condition, resulting in an extended hospital stay and multiple surgeries. The defense contended this patient had a propensity for developing adhesions and a very reactive bowel. Due to underlying bowel fragility and type II diabetes, wound healing was compromised and necessary procedures to treat bowel perforations resulted in more perforations opening up post-operatively thus requiring several repair surgeries. Ultimately, the patient’s overall poor bowel condition was responsible for the multiple perforations and need for additional surgeries. 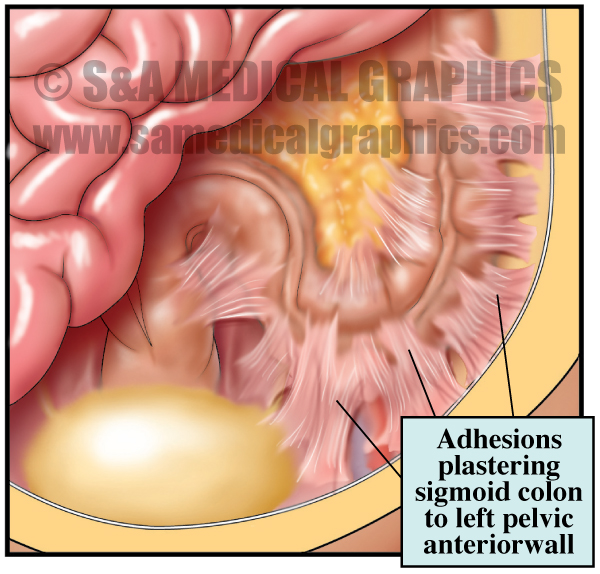 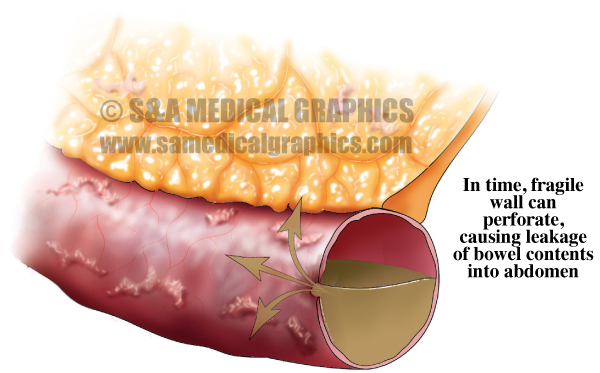 The plaintiff alleged the defendant team failed to properly follow and treat the patient’s bladder cancer.

The visual strategy for this case began by introducing the jury to normal abdominal anatomy and laying the groundwork for future exhibits. The defense team was then able to use this foundation when explaining the anatomy the defendant encountered during the cyst-removal surgery. By comparing the two it was clear this patient’s dense adhesions severely obscured the operative field. 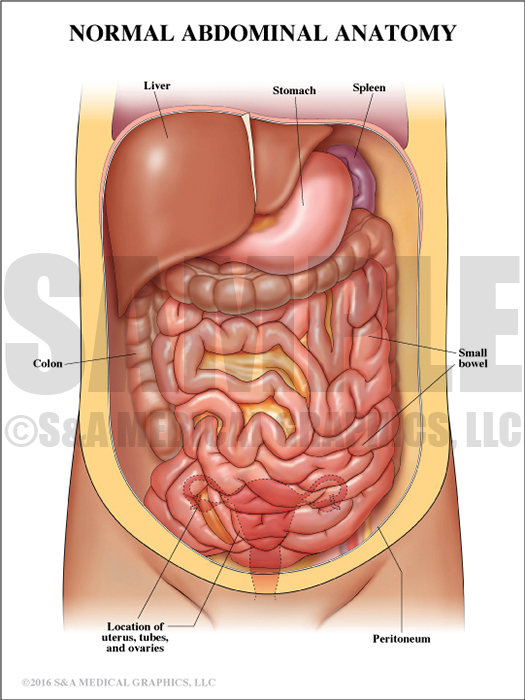 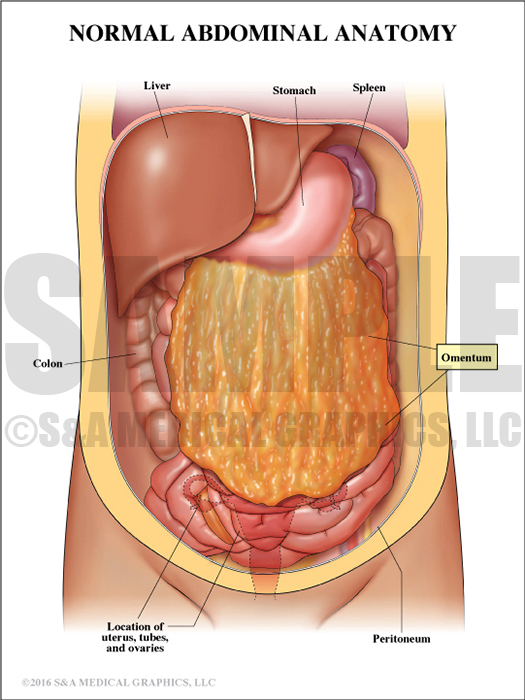 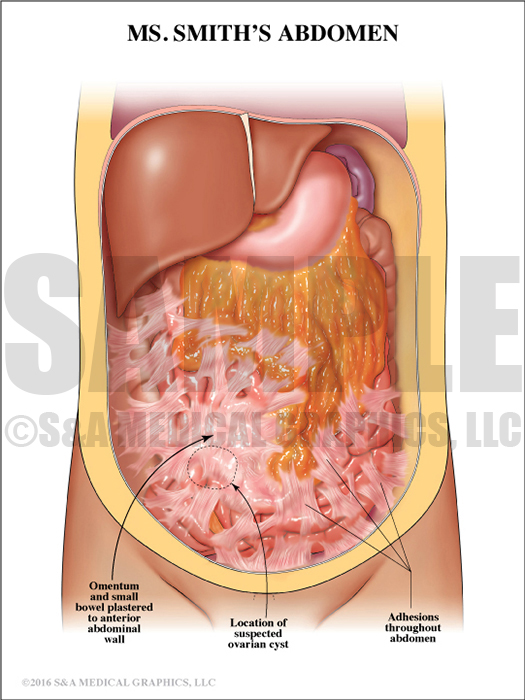 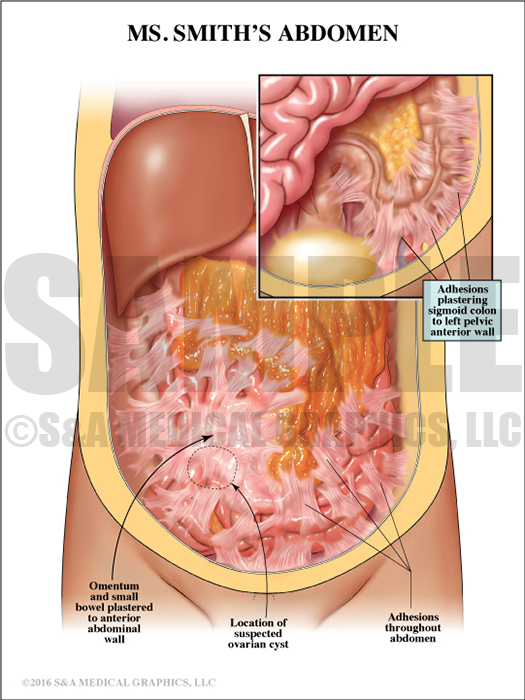 The subsequent exhibit demonstrated the defendant did not use any sharp instrumentation during his exploration of the abdomen making it highly unlikely he perforated any portion of the bowel. 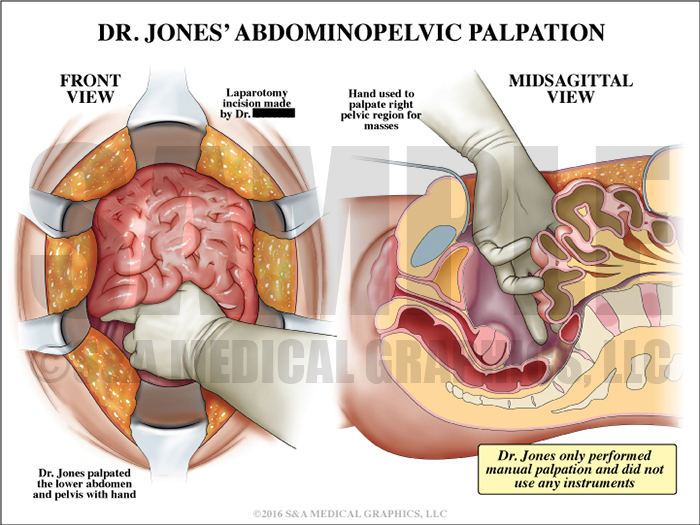 The next few exhibits were designed to explain mechanisms of bowel injury that can occur in the absence of negligence. It was essential the defense team explain for the jury the concept of delayed perforation, including thermal injury from arcing of electric current during bovie dissection of adhesions and the breakdown of bowel wall secondary to loss of integrity. 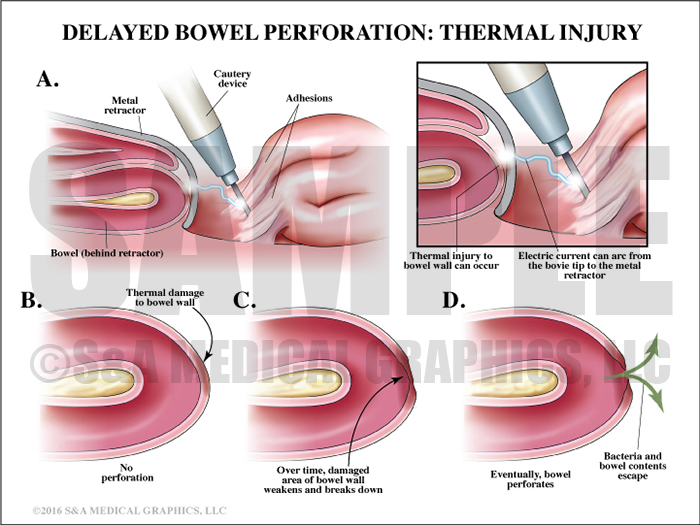 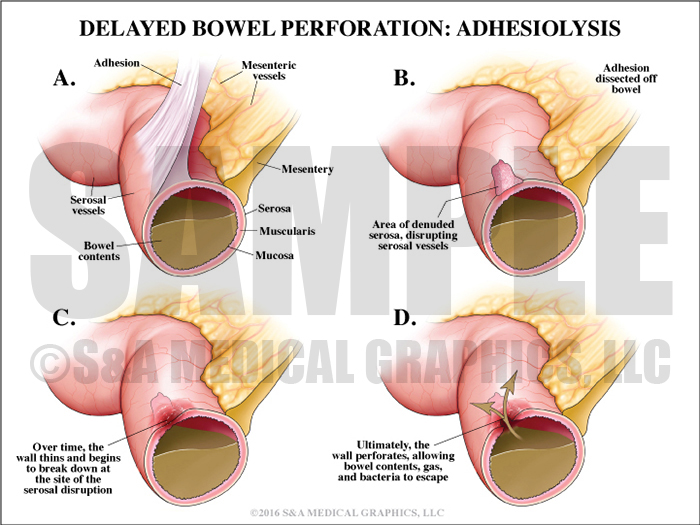 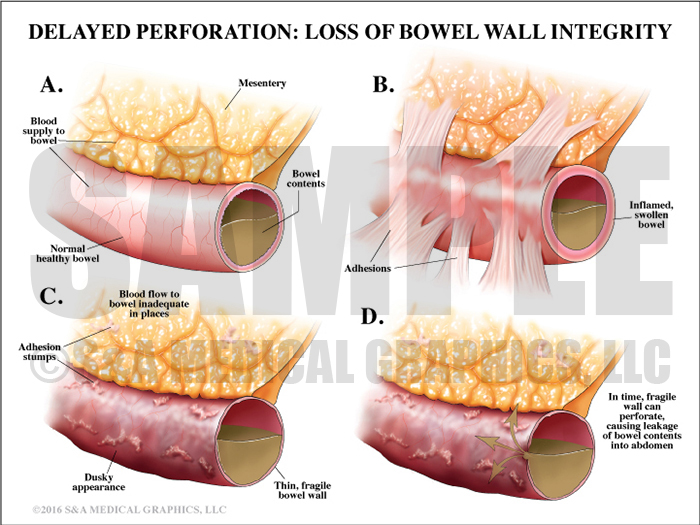 The defendant’s laparotomy procedures were presented using step-by-step illustrations. This allowed the defendant to become a teacher explaining these complex procedures in a linear fashion and helping the jury better understand how adhesions and a reactive bowel complicated the surgeries. 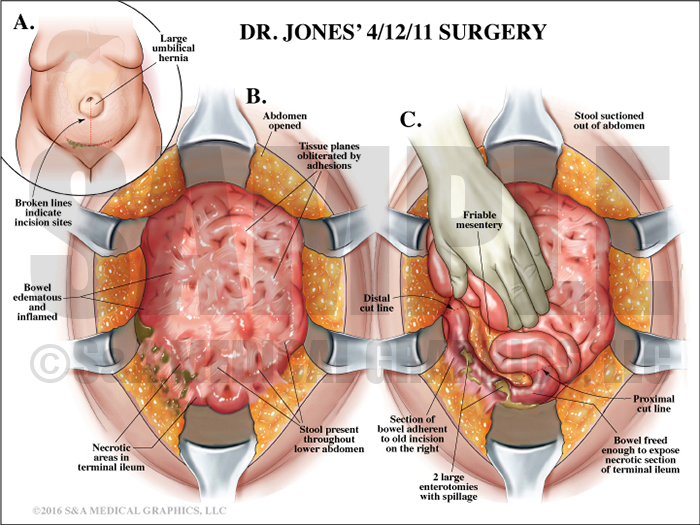 Exhibits 6-10 depict the steps to the patient’s surgery. 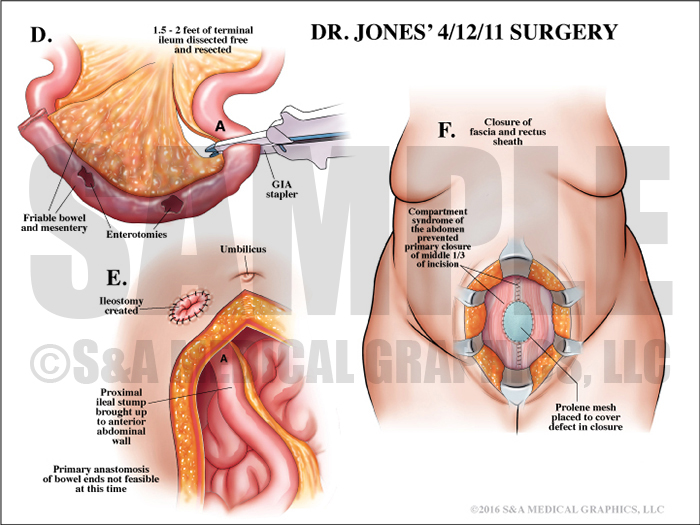 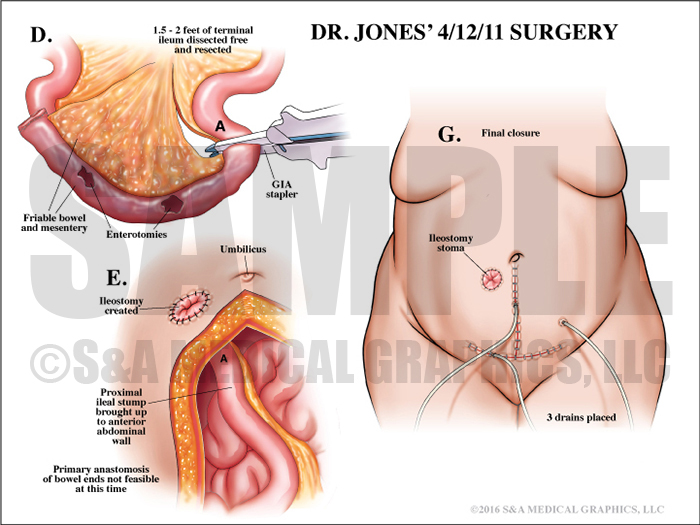 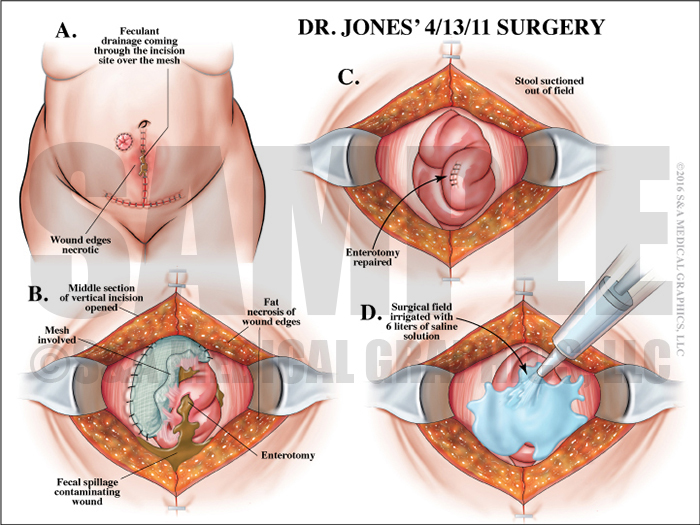 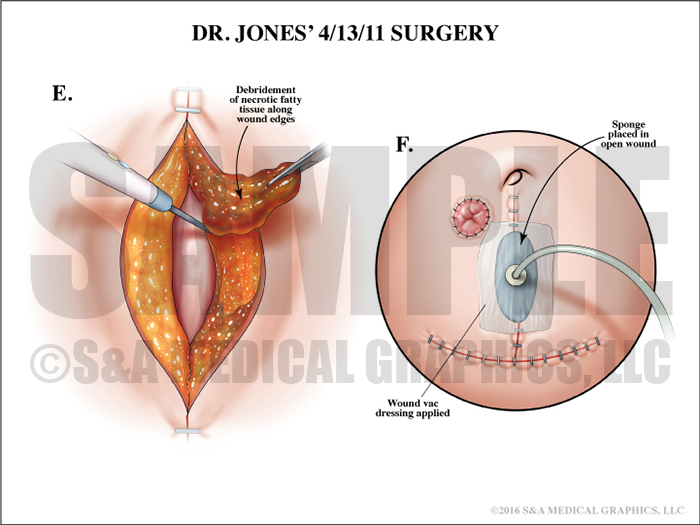 Finally, an exhibit illustrating the snowball effect of a weakening bowel wall was critical in undermining plaintiff’s claim that the defendant’s repairs were faulty. This demonstrated how loss of bowel integrity can lead to new perforations cropping up around prior repairs. 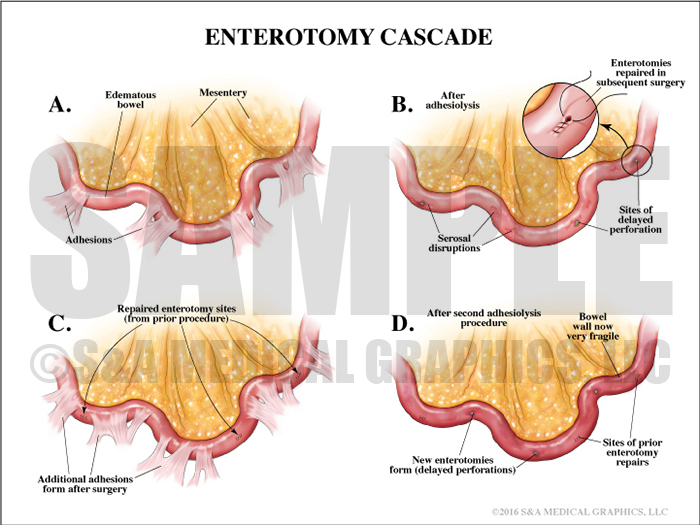 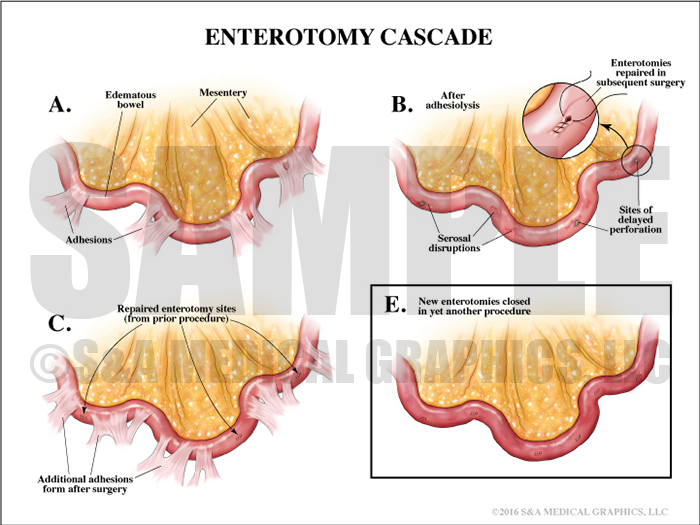 Overlay depicting the new enterotomies closed in another procedure.